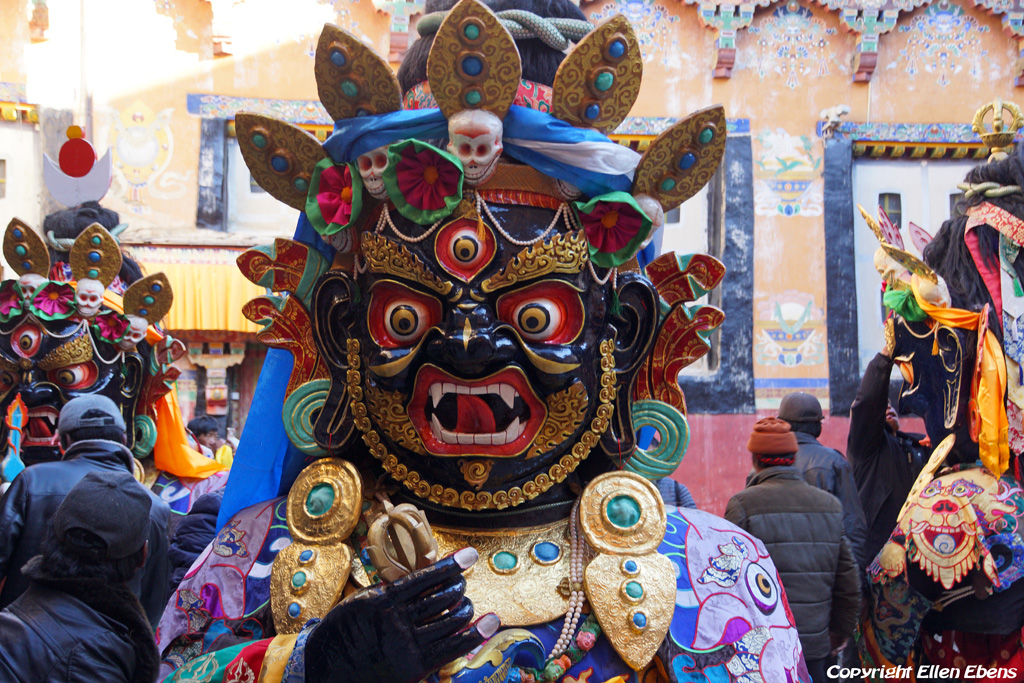 Finally. It took me some time. But they are on my website now. The pictures I took during my travel in Tibet in January 2017. And they can be seen in three parts: go directly to part1, part 2 and part 3

I took again a lot of pictures during this travel because I saw and experienced again beautiful and special things. I was very lucky during this trip. Again I saw only very few foreign tourists in Lhasa. The rest of the trip I was alone between the Tibetans. And that is what I like so very much. I visited places that were familiar to me but I also saw new landscapes and monasteries. And I was very lucky that in many monasteries, there were monks gathering in the assembly halls and they were chanting. I saw that in the monasteries of Pelkor Chöde in Gyantse, Shalu near Shigatse, Drigung Til and Tsurpu. And in Sakya I was totally lucky because there was a festival and they took the big statues out of the halls of the monasteries and they danced with them on the courtyard of the monastery. It was so great and as I said, I was there alone between the Tibetans.

Monks chanting at the assembly hall of Shalu Monastery

Monks chanting at Driging Till Monastery

Festival time in Sakya Monastery. The big statues are taken out of the chapels and made ready for dancing.

Festival time in Sakya Monastery, dancing with the big statues

Taking pictures in Tibet is not always easy. With that I mean that the light makes it most of the time very difficult to make good pictures. In January I had beautiful sunny days. That’s great but the light is so harsh to make pictures. The difference between the light and the shadow is so big and that influences your pictures. So you have to take good care how you make the pictures. It’s also difficult to make good pictures inside the halls and chapels of the monasteries. Because it’s very dark inside the monasteries. Sometimes you have nice rays of sunlight coming into the halls. That makes great pictures. But sometimes there is a lot of light on a certain spot in the hall while the rest is quit dark. Well, if you have a good look at my pictures I’m sure you see what I’m telling here.

The main assembly hall of Tsurphu Monastery still in the shadow on a cold winter morning. Tsurphu is the official seat of the Karmapa. Tsurphu was founded in 1187

Festival time in Sakya Monastery, dancing with the big statues

Monks chanting at Driging Till Monastery

Monks chanting at the assembly hall of Shalu Monastery

What I enjoy every time when I’m in the winter time in Tibet, are the many pilgrims coming to Lhasa. Especially walking the Barkhor – the street around the sacred Jokhang Temple in the old centre of Lhasa – with the pilgrims is something I enjoy so very much. So many beautiful Tibetan people walking their koras there. And I walk with them. And of course I try to interact a little bit with them and take pictures of them.

Lhasa, pilgrim at the Barkhor

Lhasa, portrait of a nun at the Barkhor

New on this trip

Kamadang Temple near Tsedang in the Yarlung Tsangpo valley

Driving up to Densatil Monastery

I was total 16 days in Tibet and like on every trip in Tibet I don’t like to say goodbye to my Tibetan friends and leave Tibet to go to my own country again.

This was the itinerary of my trip in January 2017