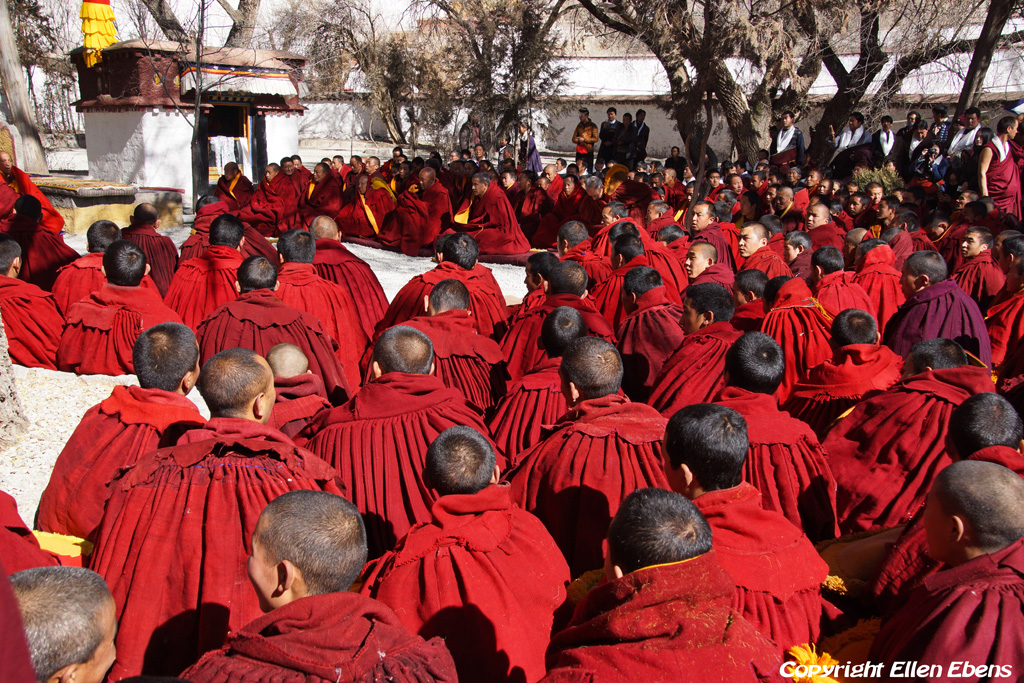 In January 2016 I travelled again to Tibet. I made again a round trip there. And I was again a solo traveller. As always I started my trip with some days in Lhasa. With my guide I visited again the most important sites in Lhasa. I also revisited Sera Monastery on a beautiful and sunny afternoon. I had expected to see the monks debating in the court yard, like every afternoon at 15.00 hours. I had seen that already many times. But when we got there my guide told me that there would be a very special and rare ceremony.

A monk had passed the highest exams and this ceremony was held for him. And this monk was the uncle of my guide! The ceremony started at 15.00 hours and the teacher of the monk, the old Shampa Thudan Rinpoche (Champa Thubten Rinpoche) was sitting on the throne and oversaw the ceremony. Also many normal Tibetans had come to the ceremony. It was so crowded. I stood with the Tibetan onlookers for two hours watching the ceremony. I was very difficult to make pictures because it was so crowded and I couldn’t move my legs or my arms. I managed to get to a few different places at the debating court yard to make pictures from different angles. I enjoyed it so much. It was so Tibetan. At the beginning of the ceremony there was one little tourist group. But after they left I was the only tourist there. The monks were sitting in a semicircular and were chanting. The monk who passed the highest exams entered the court yard after about an hour. First he was seated at the side of the court yard. Later he went to his teacher Shampa Thudan Rinpoche (Champa Thubten Rinpoche) to pay his respects to him. He also had some debating to do but you saw it was for the form. The monks got food served – Baktsamma, rice with butter and raisins – and the got butter tea.

At the end of the ceremony they put on their yellow hats. After that the monk who had passed the exams – and who had become a lama now – went to his residential building. The Tibetan onlookers formed a procession for him. At his residential building well-wishers could pay their respect to him. I also went their with my guide and other family members of him. I also paid my respect to the lama. In the last room of the building a large buffet with all kind of foods stood ready for the well-wishers. So my guide and I put all kind of dishes on our plates. Outside on the ground but in the warm sun we ate our meal with the other well-wishers. For the guests there were pillows and blankets laid down on the grass to sit on and eat. It really was such a special event. I consider myself very lucky an privileged to be there and watch and be part of this ceremony, which happens maybe only once in fifteen years.

See the photos of this ceremony